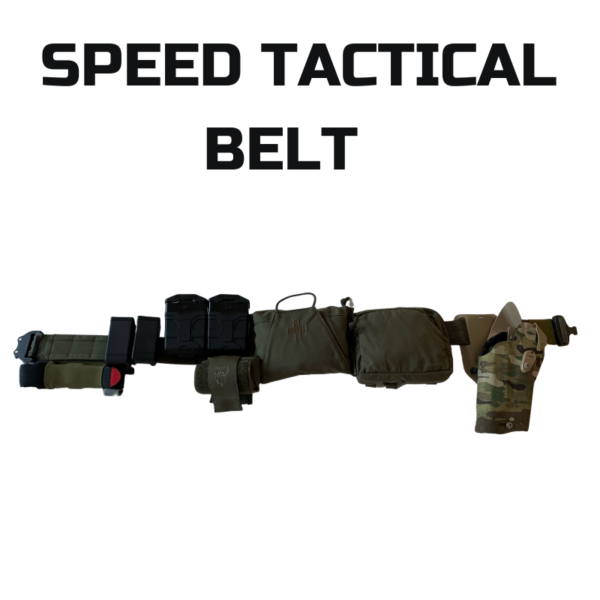 Complete belt for rifle and pistol shooter- SPEED BELT TACTICAL . The basis is a GMB-D belt (Ginger’s Molle Belt D-RING), equipped with a certified Cobra D-Ring buckle by AustriAlpin with a very high strength of 18kN. The belt has two hard pouches for a carabiner, from a reputable company ESP (Euro Security Products). Up to 9mm, pouches from the American company Blackhawk are used. The front of the belt has been equipped in accordance with the standards of special forces with a handle GTG for a CAT tourniquet in the “ quick release “. The back of the belt is also occupied by GTG in the form of a large Cargo and Blowout first aid kits. There was also a place for the so-called A “loafer” GTG placed intentionally in the vicinity of the dump bag, which in this configuration functions as an additional organizer. The entire belt is closed around the perimeter by a pistol holster, of course by SAFARILAND (as befits the configuration of the belt of a special forces operator). All holsters have been adapted to the most popular pistols in the service, equipped with tactical lighting and a day / night optical sight. Holsters are equipped with various types of mounting, the battle-proven ALS opening system, SafariLaminate ™ outer shell covered with Cordura, and a suede interior SafariSuede ™ (CASE NOT INCLUDED IN THE SET, you can buy it for the model you choose)

The GMB-D ™ belt is made of the highest quality, high-strength nylon straps, made in the USA. The Cobra 18kN 50mm buckle from AustriAlpin will meet the expectations of the most demanding users. The outer belt has 2 rows in the MOLLE system, which ensure safe and stable mounting of pouches. The tapes have been narrowed in half to keep the design minimalist.

Manufactured by Euro Security Products stiff, polymer pouch for one 5.56 mm magazine for AR15 / M16 / M4. The pouch perfectly protects the magazine being carried and allows it to be quickly pulled out. A spring steel plate with a rubber spacer is responsible for holding it. The set includes three spacers of different thickness, which allows you to adjust the force needed to remove the magazine to the user’s requirements.

Single pouch from the American company BlackHawk for a 9mm magazine

Large CARGO 3 × 4 pocket, closed with a double zipper, designed to carry various equipment. The MOLLE mounting system allows you to attach the pouch to any equipment

The tear-off GTG first aid kit will safely store all necessary medical supplies, while ensuring quick access to them through a paracord handle and a large Velcro flap. The cross embroidered on the flap makes it easier for third parties to identify the first aid kit. Universal assembly allows you to attach the first aid kit to MOLLE surfaces and to thread the GMB through the belt.

Tourniquet holder. It enables reliable and very fast access to CATA when needed. It can also be mounted on a tactical vest, chestrig or other belt

The GTG drop bag is distinguished by a sewn-in stiffening of the collar to prevent the material from falling down, and thus reducing the bag opening and making it difficult to locate. Low weight, extremely small dimensions after folding and quick opening of the shotgun facilitate work in all conditions. Mounted in the MOLLE system on two rows. Made in Poland using American materials.