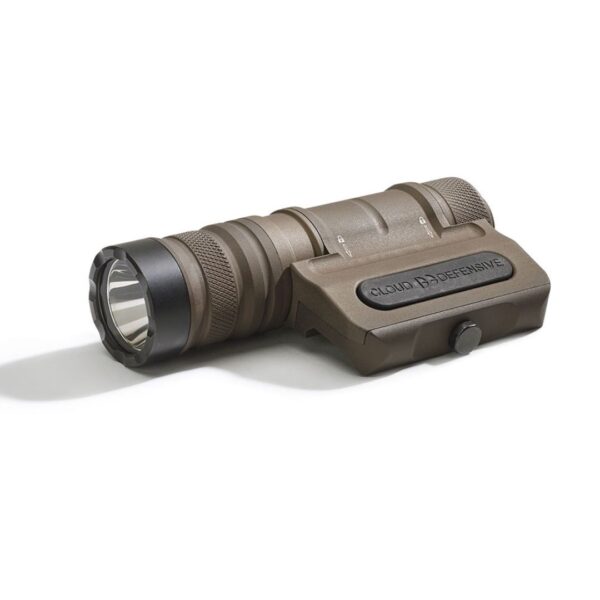 Cloud Defensive products reflect contemporary, cutting-edge innovation and an uncompromising approach to tactical lighting devices. Thanks to strict quality control standards, effective production management and the right choice of components, Cloud Defensive has become the most powerful manufacturer on the market of tactical flashlights, accessories and grips. At the same time, the launch of the next generation of Cloud Defensive LCS (Light Control Systems) allowed for the creation of the most modern tactical lighting management systems.

The OWL (Optimized Weapon LIght) tactical flashlight was designed by the famous designer Matthew Tenbarge and is made in the USA. Flashlight production is carried out with the utmost precision, using the most modern Haas digital machine tools. OWL is a tactical flashlight with high power, very compact structure, high resistance to mechanical damage and weather conditions, and, most importantly, without an additional switch on the cable.

The OWL is a flashlight designed to be mounted on rifles and carabiners equipped with the MIL-STD-191 rail. commonly known as the piccantina rail.

The base of the flashlight is a solid body made of 6061-t6 aluminum alloy with very thick walls, finished with type III hard anodizing (according to the MIL STD – “Hardcoat” level) being one unit with a side mounted rail mount, which also has a rubber-coated button for switching the flashlight on. The flashlight head and the cover closing the battery compartment are attached to the body by means of an armored connection similar to a “bayonet latch”. At the bottom of the battery compartment, a key is molded to tighten the flashlight assembly. OWL can be opened and closed even with thick gloves.

Due to the fact that the flashlight assembly is placed to the side, the user selects the side on which will mount a flashlight. Changing the mounting side is very simple, disconnect the head and battery compartment cover from the body, mount the flashlight body and reassemble. Mounting the flashlight on the right and left side does not change anything in its functionality, because we only reverse the side of the assembly. This makes the OWL flashlight very unique.

The flashlight’s electrical system, made of the highest class components, allows for an above-average intensity result visible light (measured in candelas) emitted by the flashlight in a given direction. This result is as much as 50,000 Candela . At the same time, an excellent value of the luminous flux was obtained. Specified at 1250 lumens . This allows for good illumination of the target at a distance of up to 365 meters. Such values ​​of light intensity and luminous flux in combination with an electronically formed reflector and excellent power supply allow achieving a level of performance that was not previously possible with tactical flashlights. The OWL flashlight surpasses competing solutions almost twice.

Most importantly, the flashlight lens ( made in the FSL- Field Serviceable Lens standard) replaceable in case of damage. The flashlight has the highest class of waterproofness IPX8. Tests were successfully performed at a depth of 200 feet (approximately 61 meters), where the flashlight was submerged for 24h. It follows that the flashlight is designed for deep immersion, then you only need to dry it.

The OWL flashlight exceeds the global standards of shock resistance, included in the ANSI / PLATO FL 1. ANSI standard for a uniform way of defining, measuring and marking the basic parameters

using only one battery SAMSUNG 18650 30Q – OWL unlike its competitors produces useful light for at least 6 hours, and the operating time at 100% power is industry-leading. Additionally, the manufacturer has included a charger with a USB cable.

Composition of the kit: