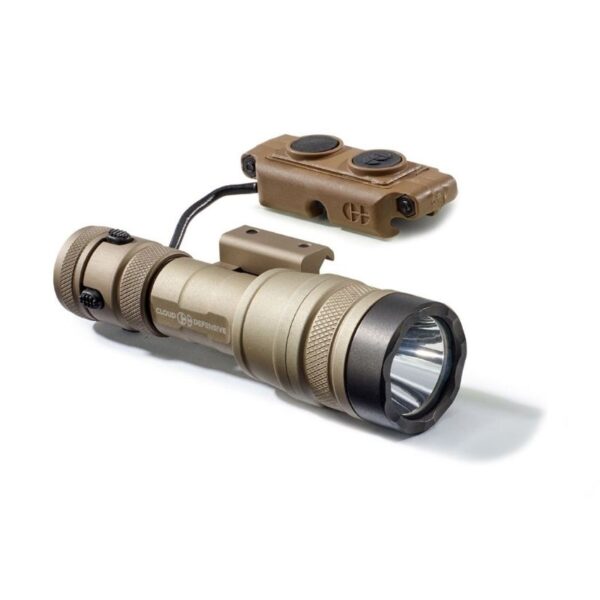 Products Cloud Defensive reflect contemporary, cutting-edge innovation and an uncompromising approach to tactical lighting devices. Thanks to strict quality control standards, effective production management and the correct selection of components, Cloud Defensive in the market of tactical flashlights, accessories and grips, it has become the most powerful manufacturer.

The production of flashlights is carried out with the highest precision using the company’s most modern digital machine tools Haas.

The base of the flashlight is a solid body made of 6061-T6 aluminum alloy with very thick walls, finished with type III hard anodizing (according to the MIL STD standard – “Hardcoat” level), which is one unit with a side-mounted rail mounting. The flashlight is adapted to be mounted on a carabiner and a rifle equipped with a rail MIL-STD- 1913 (picatinny rail) , M-LOK or KeyMod.

The electric system of the flashlight, made of the highest-class components, allows to obtain an above-average result of the intensity of visible light emitted by the flashlight in a given direction. The REIN MICRO flashlight has power 55,000 Candela and 1,300 Lumen.

Such values of light intensity and luminous flux in combination with an electronically formed reflector and excellent power supply allow to achieve a level of performance that was previously not possible with this type of tactical flashlight. REIN beats the competition twice.

Most importantly, the flashlight lens ( made as standard FSL- Field Serviceable Lens) in case of damage it is replaceable.

The glass in REIN is 3mm thick, the thickest value in the industry. It can withstand multiple 5.56 mm bullets hits Simuntion. The bezel is made of S7 tool steel, which makes it a flashlight shock tool.

The flashlight has the highest class of waterproofness IPX8. The tests were performed successfully at depth 200 feet (about 61 meters), where the flashlight was immersed for 24h. It follows that the flashlight is designed for deep immersion, then you only need to dry it.

The REIN flashlight exceeds the world standards of shock resistance, included in the ANSI / PLATO FL 1 standard. ANSI with a uniform way of defining, measuring and marking basic parameters.

The 3rd generation LIGHT CONTROL SYSTEM ensures proper and reliable light control during each mission. The remote switch has a momentary function as well as the ability to turn on the flashlight permanently. The switch is fully hermetic. Patented Light Control System remote switch. It offers both momentary and permanent activation. The remote switch is electrically isolated from the push button switch on the rear cover. If the remote switch fails, the REIN will still operate with the button on the handpiece. LCS is fully resistant to immersion, flooding, shocks and dust.

The switch cable can be placed on the left and right sides, it is 12.7 cm long. The perpendicular cable exit from the rear cover protects the cable from damage.

The manufacturer has included a charger with a USB cable.

The composition of the kit: